A guide to South Molton and the surrounding area

The A361 (North Devon Link Road) bypasses the town and provides excellent access to Barnstaple, to the west, and Tiverton and the M5, to the east. South Molton is a small but highly regarded North Devon market town. The weekly thriving sheep and cattle livestock market is on Thursdays. 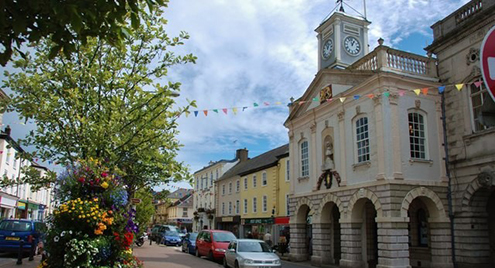 Tourism plays an important part in the economy of South Molton, which is ideally positioned within easy reach of Exmoor, Dartmoor, the rugged north coast and beautiful sandy beaches to the west. The town has remained largely unspoilt, containing many interesting buildings from different periods, including Medieval, Elizabethan and Georgian properties. A heritage trail guides visitors around the town's historic sites.

In South Molton's Museum there are two Royal Borough Charters granted by Elizabeth I in 1590 and Charles II in 1684 and these are commemorated annually with a fair held in June. South Molton's early wealth came from its importance as a centre for the wool trade, which declined in the 18th and 19th Centuries, when the town became a centre for transport, administration and service.