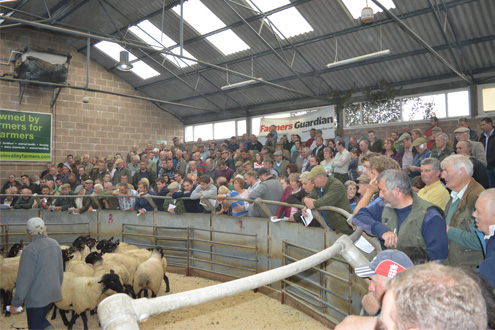 South Molton Market is primarily a prime and cull sheep market ideally located in North Devon close to the A361 Link Road and within a densely populated sheep area. 2016 has been a strong year with prime sheep numbers being sold through South Molton Market to the beginning of December showing a 15% increase compared to the same period of 2015. Just under 56,000 lambs have been sold with the amount of Cull Ewes also rising by 40% to just over 27,500.

During the year a number of customers returned to sell in the market, with the live weight trade stronger than the dead weight at many times of the year, especially at times when prices are rising.

Average prices for prime lambs are up just over £10 per head at £79.09, peaking in July and August when prices traded at £14-15 per head more than the corresponding months in 2015. Lamb prices remained unusually strong during the summer, due to the weakened pound following the Brexit vote. However, as we approach Christmas, a time when prices usually rise with the increased demand, prices have fallen. Cull ewe prices are down £4 per head to an average of £67.77, with more breeding ewes in the country there has been no shortage to create the sudden price increases we have seen in previous years.

December so far has seen average prime lamb and cull ewe prices drop back to almost exactly the same level as last December, to £72 per head and £65 per head respectively. Overall it has been a better year than last to be a sheep farmer but with so much uncertaintly in the agricultural and political worlds who knows what next year will bring.