Port Isaac: is it worth the hype? 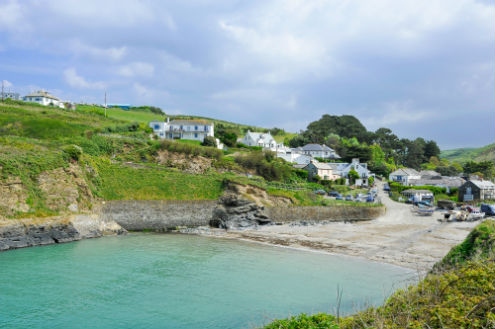 Guy Parsons of Stags Wadebridge explains why there is so much more to Port Isaac in Cornwall than Doc Martin.

The picturesque fishing village of Port Isaac, located on the rugged Atlantic coast of North Cornwall, is a true master of evolution.

The first sea wall was constructed during the reign of Henry VIII but has long since yielded to two strong stone quays protecting the village and harbour from the Atlantic Ocean. Prosperity was tied to local coastal freight and fishing. The port handled cargoes of coal, wood, slate, ores, limestone, salt and pottery, which were manhandled along its winding narrow streets to and from the harbour. The thriving pilchard fishery began here before the 16th century and by the 1850s there were close to 50 registered fishing boats and four fish cellars in operation.

Fishermen still work from the Platt, landing their catches of fish, crab and lobsters. Many of these find their way to the tables of the Michelin starred restaurant run by Nathan Outlaw located at the top of the village.

The village is perhaps best known today for its association with a number of TV series. Port Isaac was the backdrop to the first series of Poldark in the 1970s and since 2004 as the location for the TV series Doc Martin. It is also home to the internationally renowned a cappella singers, Fisherman’s Friends.

All this natural beauty, history and celebrity culture does not go unnoticed. In the past year, a second large carpark has been opened to cope with the volume of visitors. All this is underpinned with a strong and resilient local community centred on its connection with the sea nad pride in such a unique and naturally beautiful location.

The property market is equally as diverse as the village, from quaint former fishermen’s cottages in Squeeze Belly Lane to the large glass balcony homes on the headland. The village offers a house for every budget and taste.

One of the homes we have on the market currently is Lower and Upper Westcott, two properties in one parcel in Port Isaac’s Trewetha Lane. Built in 1937 as a single home, each storey is now a standalone apartment with three bedrooms respectively. With beautiful sea views, garden and parking for five cars, this would make an ideal letting business, or could be converted back to a single dwelling. It’s on the market for £579,950.