Wet and muddy conditions do not deter salegoers 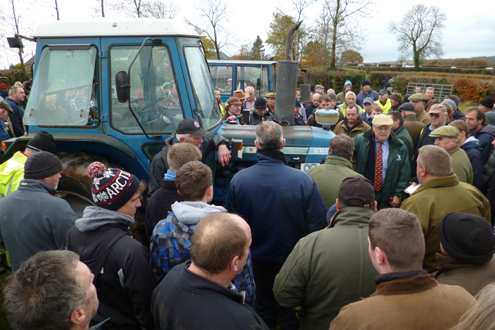 Stags held their final On Site sale of the year last Saturday at Crockers Farm, Hemyock on behalf of John and Barbara Churchill. Johns family have farmed the land for over 100 years and are now hoping to move into a bungalow in Hemyock. A huge crowd of salegoers arrived undeterred by the rain and wet under foot conditions, filling up three car park fields, to see a total of 650 lots go under the hammer. The vehicles and machinery were presented by John Churchill in excellent condition and the star lot of the day was no exception. The 1996 Landrover Defender 90 TDI 300 (66,000 miles) was presented in immaculate condition and went on to make £11,000.

The sale also included a retirement sale on behalf of Mr Winston Scoble, Hemyock who used to run a small contracting business. His lots topped at £5,000 for the 1987/8 Case International 956XL Tractor. There were a number of outside entries in the machinery lines which included a tidy West 1300 Dual FYM Spreader that realised £2,500, a 1969 David Brown 996 Tractor c/w Loader that sold for £1,100 and an Albutt F402 Bale Stacker that made £550.

The sale concluded with 120 lots of furniture and household items with prices topping at £380 for an extending Walnut Dining Table. Commenting after the sale auctioneer Stafford Sampson reported “It has been a highly successful day with John being well rewarded for his hard work in looking after his machinery so well with strong prices.’’