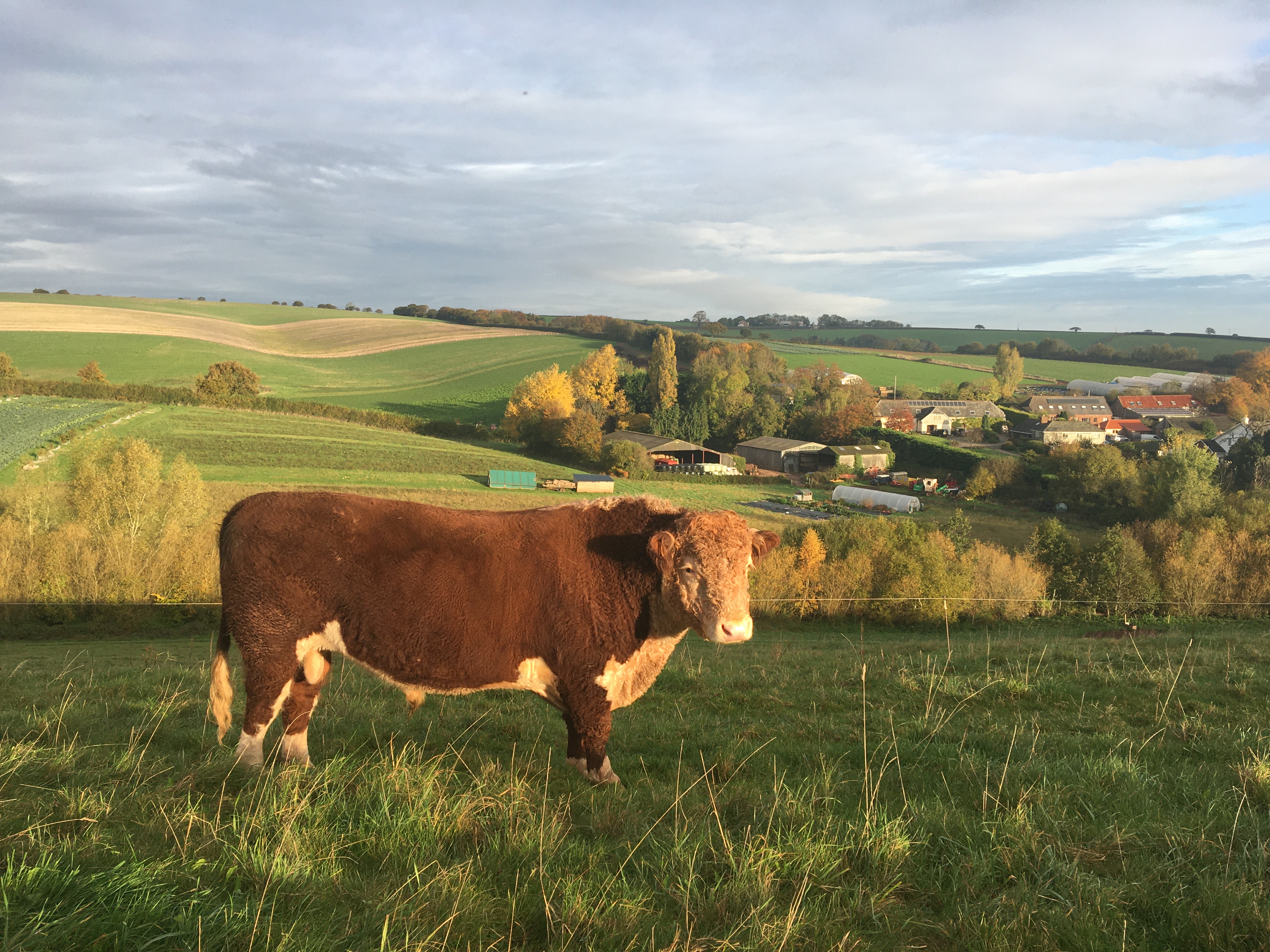 Stags On Site Sale team were delighted to get to their first sale of the year which was just north of Exeter at West Town Farm, Ide. Under the instructions of Mr Andy Bragg to reduce his organic Hereford suckler herd and surplus farm machinery. Stags had conducted the sale of Mr Braggs British Friesian herd of dairy cattle in 2006 and since then he has been using pedigree Hereford bulls as well as going organic. The use of the Hereford Bull has resulted in a very purebred and very docile Hereford herd of cattle. The weather in the lead up to the sale has been horrendous but the day went without any dramas and everyone was able to attend and park safely.

The sale started with the cattle and there was little room around the ring for buyers or spectators. With few organic cattle coming to the market the sale attracted buyers from further afield with the main contingent coming from North and South Cornwall. Topping the trade were a lovely run of 2 ½ year old in calf heifers which topped at £1020 (averaged £967). Cows and calves topped at £980 for a 4 year cow with her steer calf at foot. The steers were well sought after and topped at £970 for 20/21 month old with a few bunches at £880 and £870 and similar aged heifers sold to £720. However, the best was for the younger cattle with 10 month old steers at £640 and 10 month old heifers at £600. There were 2 breeding bulls on after topping at £1000 for the 7 year old ‘Bromham 1 Kudos’.

With dry weather overhead, the consignment of 65 lots of surplus machinery was sold to a buoyant trade immediately after the cattle with the top price of the day achieved by the 2007 Deutz-Fahr Agrotron 150.7 running at 11,780 hours on the clock and coming complete with a creeper box, front and cab suspension and front linkage. The tractor had spent most of its working life towing planting and harvesting attachments and was presented very well considering its age and hours total. The powerful tractor went on to sell for £13,250 at the fall of the hammer. However, the highlight of the day came from the 1987 Fiat 100.90 DT which had 12,524 hours on the clock but again was presented in tidy condition having been on the farm since new. Serving two generations and establishing itself as somewhat of a classic over the years it exceeded everyone’s expectations and surged to an excellent price of £9,000, purchased by a farming family from Modbury, Plymouth who had previously owned one of these desirable tractors.

The final of the three tractors offered on the day was the farm workhorse being a well-maintained 1986 Case International 856 XL c/w loader with 7,697 hours on the clock and made £8,000, over £2000 more than what it was purchased for many years ago. A good price on the day this tractor still looked to offer value to the purchaser who travelled from Totnes, being as genuine as they come and very universal in its use.

The top priced implement of the day came from a Krone KW 6.70/6 six rotor tedder which looked a clean machine on the whole but was showing signs of its age in places and achieved a solid price of £1,550. The 2008 Suzuki Eiger Runner Quad Bike with 11,162 miles on the clock, owned from new made a strong price when considering its 12 years of service to its owner and it’s need for attention in places with the hammer finally falling at a price of £1,550 also.

A small number of outside entries topped with a tired looking Jeantil Westmac P3800 RE straw chopper and the Armer Salmon potato harvester which made £450 and £420 respectively concluding what was a very successful day all round.