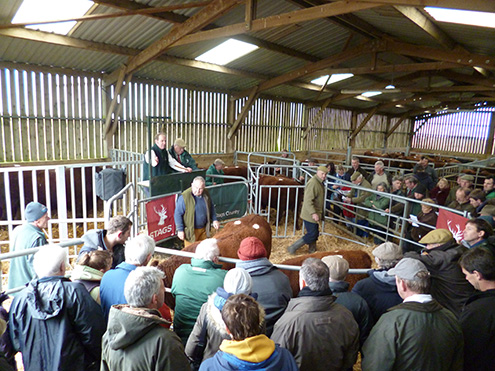 Stags Auctioneers were delighted to conduct the dispersal sale of the Stone Farm Pedigree and Organic Devon Cattle, Surplus Farm Machinery and Fodder on behalf of Ray and Ilga Auvray at their farm on the outskirts of Bideford, North Devon.

Potential purchasers travelled long distances to secure new bloodlines with many going home empty handed. Top price of the day was £2,250 for the 2010 Born Pedigree Bull, Whitefield Knight-of–the-Realm, being bought by Messrs P R & S C Chapple, Beaworthy. Whitefield Knight-of-the-Realm has left some well grown stock behind and was purchased at the Devon Society Sale in 2012 when he was the Breed Champion for £2,450.

Perhaps the best trade of the day was seen for the youngstock where 2015 born Heifers topped at £819 twice, Stone Farm Kirsty and Stone Farm Karen, both being sired by Whitefield Knight-of-the-Realm and purchased by Mr M C Martin, Liskeard. 2015 born Pedigree Steers topped at £997.50 for two, the strong prices being driven by Organic purchasers.

The sale started with the sale of surplus Farm Machinery which attracted plenty of interest, top price being £6,600 for the 1995 Case International 4230 Tractor c/w Loader purchased by Messrs W J RJ & W R Pollard, Launceston. This was closely followed at £6,000 for the McConnell PA48 Hedgetrimmer purchased by local farmer Mr G Grigg. The Organic Fodder sold to £15.50 a bale for 42 bales of 2016 Haylage, with the 2015 Hay making £15 a bale.

Delighted auctioneer Chris Clapham said after the sale ‘The interest and prices of the Devon cattle at this sale clearly demonstrates the benefit of the ‘On Farm’ sale; the cattle looked really well having been picked and sorted in there own surroundings and purchasers could buy decent breeding stock from the farm where they have been reared with little disease risk’.