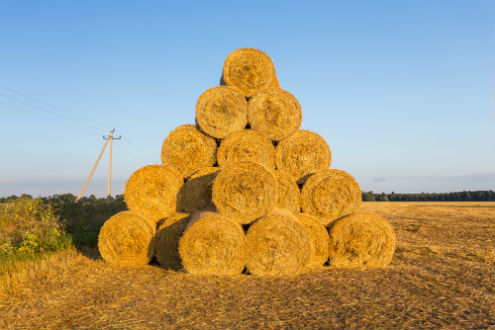 Stags’ online fodder sale, which was the first of its kind in the West Country, has proved popular, selling more than 800 bales of fodder.

The sale ran online for ten days between January 23 and February 2, allowing people to bid from home. The auction produced some encouraging results which included barley straw selling for £29 per bale (£112 per tonne), wheat straw selling at £32 a bale (£105 per tonne) and oat straw achieving £20 per bale (£106 per tonne).

Although straw sold well in the sale as expected, haylage, silage and hay were all harder to place, with modest results seen, said Harvey Pile of Stags. “Having said this, though, positive results have been achieved for vendors who entered fodder into the sale since the close of the auction with haylage sold to £23 per bale and hay sold to £14 per bale just a few deals to mention,” said Harvey.

With the weather continuing wet and cold, demand for fodder looked set to remain strong in the early Spring, so Stags scheduled a second online fodder auction running from Saturday February 25 until Wednesday March 7.

The new Stags online platform incorporates competitive bidding over a ten-day period allowing purchasers to make enquiries and visit the lots listed for sale at their convenience.

The sale is a concept devised by auctioneer Harvey Pile of Stags Agriculture department. “It follows on from several successful online Stags machinery sales, in which we offer a wide range of vehicles and machinery to bid for at the touch of a button,” Harvey said.

“Although we are sure that online sales will take time to establish themselves and become a widely accepted service we fully intend to make online fodder sales a regular fixture on our calendar and lead the way in offering the service,” said Harvey.

The auction, which starts on Tuesday January 23, means that purchasers have no need to attend a traditional auction and can bid online instead. “This frees up their time and potentially enhances the value and geographical market place for the feedstuffs on offer,” said Harvey.

As well as advertising in conventional regional publications the Stags Agriculture department promotes its sales through its well-supported Facebook following which currently boasts 4,500 “likes” ensuring a diverse and wider audience is reached.