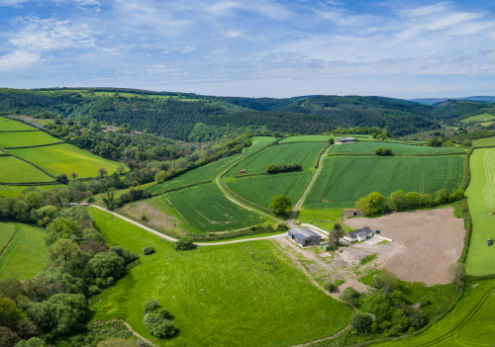 Stags Farm Agency is pleased to announce that it has sold a small farm on the edge of Dartmoor National Park to a buyer from the South East of England. Bigport Farm at Dunsford, which sits just inside the park boundary, extends to 92 acres and occupies a very quiet and secluded position with views over its own land and beyond.

With the ring-fenced land is a modest bungalow with an agricultural tie, which would benefit from a programme of refurbishment or perhaps even replacement, subject to the necessary consents.

The land at Bigport meanwhile comprises productive arable and pasture land, as well as some mature broadleaf woodland, which runs down to the River Teign. The buildings at Bigport include a traditional cob barn and two useful modern farm buildings.

The buyers, a farming family from West Sussex, are relocating to Devon with the aim of finding a quieter, more peaceful way of life. They are downsizing their farming operations, but will be relocating 74 of their cattle to Bigport. They look forward to integrating themselves in the local community.

According to George Alder, Head of Stags Farm Agency, the purchase reflects the growing trend of farmers looking to escape the more populated parts of the UK in favour of the quieter South West. "Our region is rightly seen as an antidote to traffic jams and an off-kilter work/life balance. Many farmers from outside Devon and Cornwall obviously feel that now is a good a time as any to relocate operations to this beautiful part of the world."